How high-quality whey protein helps keep me on top of the world in competitive orienteering. 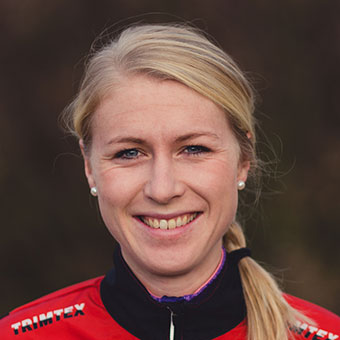 Maja Alm is one of the world’s most successful orienteers and cross-country runners. She has won six gold medals in the orienteering world championships, including a trio of consecutive victories in 2015, 2016 and 2017.

If you’ve ever tried orienteering, even if it was just for fun, you might remember the way your body felt both during and after the event. After all, scrambling over varying surfaces and performing endless ascents and descents with your eye on a map and a ticking stopwatch on your wrist is pretty hard going.

Orienteering at an elite level is what I do best. In 12 years of serious training, I’ve competed in numerous championships against the world’s best in the field. I’ve always been into running, both track and cross-country, but started getting serious about the sport of orienteering as an 18 year-old.

To win the world championships six times, as I have managed to do, you have to be extremely serious not only about how you train but also about what you’re putting into your body. And my protein diet is an important component in my success to date.

Building strength
I train most days of the year, varying the exercise between running and strength training. A lot of the time, I’m just running a lot of long intervals, swapping from one terrain to another as much as possible to reflect the realities of a wide range of competition conditions.

Orienteering mainly breaks down the muscles in the thighs – and that’s where it hurts most, of course! It’s very demanding for the lower body, because you’re constantly changing position. So to be competitive and to avoid injuries, you have to be strong in every leg muscle. And the softer the terrain, as we often encounter in Norway or Sweden, for example, the stronger you need to be. The whey protein supplements I take every day help to boost my leg strength – and my chances of being ready to compete time and time again.

Protein routine
Protein supplements have always been part of my sporting career. As a junior athlete, I became part of Team Danmark – an organization funded by the Danish government to promote elite sports. We were given protein bars and recovery drinks as part of our normal routine, along with professional advice from the organisation’s nutrition experts. We were instructed to take the supplements within the first 30 minutes after finishing training or a competition. Dairy proteins were the preferred source and, from memory, the emphasis was on taking these supplements as a recovery measure after competition rather than as a key part of my training regimen.

I’m still with Team Danmark, but it’s a little different now. Protein supplements in the form of hydrolyzed whey protein are something I always take straight after every training session. Unless, that is, I’m about to eat a good meal within an hour or so after the session. But given that most of my training takes place outdoors and far from of a kitchen, and I often have to drive an hour each way, protein supplements are a super-convenient way to get what I need.

Win-win
At this level in the sports world, athletes are often approached to help scientists explore the possible benefits of new nutrition products, training approaches and so on. And it can be a win-win for both sides. For example, I participated in some whey protein trials in Denmark where the results were shared with the participants afterwards. There were some learnings there that changed the way I use my protein supplements today. And last year, I was part of an experiment that tested the effects of taking whey protein before sleeping.

Staying on top
Most people know which exercises to include and how to follow a training plan. But what really makes the difference is the recovery phase. By focusing on how I eat and when I eat, as well as on good sleep quality, I feel I can stay at the top of my game.

It’s all part of what I believe has made it possible for me to win the world championships in orienteering so many times: Focusing on a goal and going all the way, without compromise, all or nothing. That’s my attitude in the springtime, building toward the world championships each summer. But in the off season, I need time to rest and to focus on other things in my life – like my family and friends, who don’t see that much of me when the heat is on.